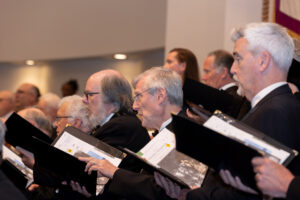 J.S.Bach Mass in B minor

Daniel Forrest – Requiem for the Living

Daniel Forrest – LUX: the Dawn from on High (World Premier)

commissioned by Gordon and Sarah Herring for the Greenville Chorale, world premier

“The World Beloved – a bluegrass mass” 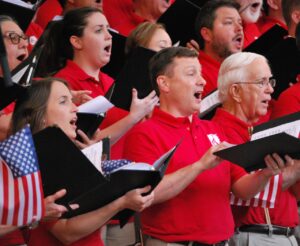 May – Women of Chorale with GSO, Mahler 3rd Symphony

April – “We Have Song” – FBC, Greenville

Benjamin Britten, A Ceremony of Carols

November – The Best of the Best – Chorale Celebrates 40th Anniversary

J.S.Bach Mass in B Minor

Beethoven Symphony No. 9 “Choral” (with GSO)

“Many Moods of Christmas” McAlister Auditorium

May – Brahms Liebeslieder Walzer and Schubert “Mass in G major”

May – Folk Music from around the world

Britten “Ceremony of Carols”, Respighi Laud to the Nativity

May – Mendelssohn The Conversion of St.Paul

November “an evening of Americana”

November -Mendelssohn The Conversion of St.Paul with GSO McAlister Auditorium

May – with Gville Ballet: Menotti “The Gorgon, Unicorn and Manticore”

May – Spring concert: Faure REQUIEM, exerpts from Kismet and Paint your Wagon

May – Salute to the Southeast (miscellaneous) 100 voices, McAlister Auditorium

April – Brahms “Song of Fate” ,Beethoven Symphony No. 9 with GSO

October – “A Night in Vienna” with members of GSO, Edwin Clark, accompanist

Purchase recordings and other merchandise

Become a member and sing with the Chorale

Your donations are greatly appreciated

Get the Latest on All of Our Upcoming Shows

The Greenville Chorale is funded in part by: